Anything For Love – S12:E11 with Katarina Rina,Nick Ross. Katarina Rina dresses in sexy lingerie and delivers a titty fuck BJ followed by a lusty stiffie ride for Valentines Day

Katarina Rina knows her boyfriend Nick Ross has something planned for Valentine’s, so she takes her time getting ready for him. She starts with a bath that lets her get all sudsy. After she cleans herself, paying plenty of attention to her big breasts of course, she gets out of the tub and dries off. She slips into some sexy lingerie, then wanders to the bedroom to see what Nick has been up to.When Katarina arrives in the bedroom, she finds a card and gifts on the bed, while Nick stands by with a bouquet of flowers. She rewards Nick with a deep kiss, then slips her body suit off so that Nick can enjoy the full force of her buxom charms. Nick is quick to bring his hands up to cup the heaviness of Katarina’s full breasts, even as Katarina reaches out to grab the silky steel of Nick’s hardon.Dropping to her knees, Katarina presses her tits together to create a sheathe for Nick to bang. Her titty fuck gives way to a BJ as she leans down lower to capture Nick’s stiffie in her hand and mouth. Licking and sucking, she makes sure that Nick’s passion is at a fever pitch before she guides him onto the bed. When Nick obeys Katarina’s insistence that he lay down, she rewards him for good behavior by continuing her blowjob for a hot second before she climbs on top and sinks down onto his fuck stick.Firmly impaled, Katarina gives a few experimental bounces up and down as she enjoys the feeling of carnal fullness. She keeps on riding, her tits quivering with every stroke, as she enjoys herself so thoroughly. Nick is eager to bring his hands up to cup those sweater puppies as Katarina builds their mutual pleasure ever higher. When Katarina leans back to really go to town, though, all Nick has to do is lay back and hang on for the ride.Falling off Nick’s hardon and onto the bed, Katarina spreads her thighs and lets Nick explore her body with his clever tongue. Licking his way through a tour of Katarina’s lovely assets, Nick eventually settles between her thighs. The flat of his tongue sweeps up her slit, spreading her juices around as he enjoys every last drop of Katarina’s arousal.Katarina flips over onto her hands and knees and lets Nick slide home in her tight glove. His fuck stick hits all the right spots as he dives deep. When Katarina collapses onto the bed and rolls onto her back, Nick gives her another round of titty fucking and then returns to the slick delight of her tight twat. Katarina rubs her clit to help herself get off one last time, then strokes Nick off so he can empty himself all over her generous boobs. 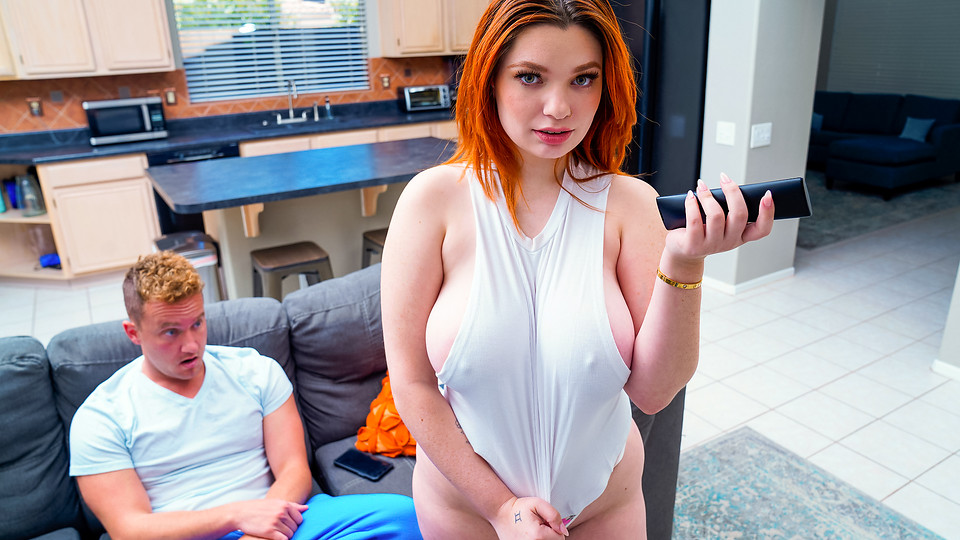