What Happened With My Stepmom On Halloween – S14:E1 with Kit Mercer,Natalie Knight. Kit Mercer and her adopted daughter Natalie Knight take turns riding a hard cock in a mommy daughter threesum

When Kit Mercer got married and moved her adopted daughter, Natalie Knight, in with her new stepson, Ricky Spanish, she didn’t expect the two kids to hit it off so well. Kit has long suspected something is up between Natalie and Ricky, but when she confronts Natalie her daughter denies everything. Later, Natalie tells Ricky that they need to quit their fucking around because her mom is on to them. The family all takes time to put on their themed costumes, which is when things get interesting.Dressed as a fairy, Kit takes the time to let her hands roam where they may. She rubs down her needy clit and shoves fingers into her cooch, but that’s still not enough to satisfy her. When Ricky comes across Kit in the living room and thinks that it’s his stepsis, he doesn’t ask before he lays his hands on that ass. Spreading the cheeks, Ricky slides it in. Kit doesn’t tell Ricky to stop or that there’s a mix up since she initially thinks that it’s her hubby. When she does realize the problem, she feels too good to stop. It’s all gravy right up until Natalie walks in and says she’s gonna tell dad!Kit doesn’t want that, so she drags Natalie in for a threesome. Together, mom and daughter deliver a blowjob that gets Ricky’s motor running. Then Ricky finally gets to wet his dick in Natalie’s twat as Natalie laps at mommy’s pussy. Kit takes a ride on Ricky’s stiffie as Natalie licks and sucks her big boobs and hard nipples. Eventually, Natalie lays down and lets Ricky bring her off while Kit rides her face. The trio finishes their threesum with Ricky pulling out of Natalie’s snatch and letting Kit bring him off all over Natalie’s hairy muff. The girls sample Ricky’s jizz, then share one last salty kiss as they enjoy the satisfaction of their new and improved family dynamic. 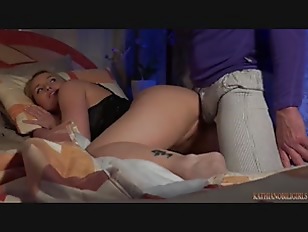