Oliver Flynn’s video on Three Steps To Fuck Your Step Sisters was such a huge success, he figures he can hit big on a sequel. This time, he has his sights on his step mom, Eva Long. Just like the plan with his stepsisters, Oliver takes time to lay the groundwork. It’s important to make his stepmom think that fucking her stepson was her idea. He achieves this by making sure that she accidentally-on-purpose sees him naked. When Eva freaks out, Oliver follows her to her room so he can comfort her. He follows that up with compliments when Eva complains about her weight, which sets the stage for Eva to find Oliver sensitive and sweet. He goes on to let his mom know he thinks she’s beautiful.The final, penultimate step of Oliver’s plan is to rock a boner in plain sight. When Eva sees it, Oliver acts embarrassed even though he knows his plan is about to come to fruition. Eva assures him that it’s natural. From there, it’s only natural, of course, for mom to make a move. As Oliver planned all along, Eva has been daydreaming about Oliver’s dick since she saw it earlier. Once Eva has popped Oliver’s cock out and started stroking it, there’s no going back. Soon enough Eva’s lips are wrapped around Oliver’s fuck stick sucking him off in a hot and horny BJ.Getting to her feet and letting her dress fall to the floor, Eva turns around and spreads her ass cheeks so Oliver can get an eyeful of her chocolate starfish and pussy. Her hands shift to her big boobs as Oliver leans in for a pussy feast. Then she sits down on her stepson’s dick as Oliver guides his mommy with his hands on her hips while she rides him. Her reverse cowgirl ride transitions to Eva on her hands and knees with Oliver pounding her lush snatch. Then he gets mom on her back so he can finish her off with a hand wrapped around her neck. Pulling out, Oliver jizzes on Eva’s stomach as the final act of his stepmom seduction. 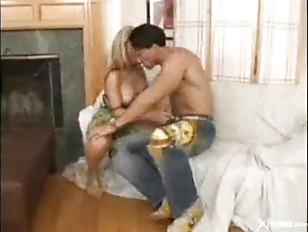